In 2010, we accidentally set up our own space agency with the mission to “inspire the next generation of poet-scientists and space explorers”. In 2016 UNSA has won a stack of awards for its interactive projects, thousands of children around the world are signed up as Agents of UNSA and our patron is the British ESA astronaut Tim Peake who is currently in space!

“The Unlimited Space Agency is great. Their approach to inspiring children about science is rigorous, fun and it works! I’m proud to serve with them on their mission to inspire the next generation of scientists and space explorers.” Tim Peake, astronaut

To celebrate Tim’s first mission to the International Space Station, we have created The Astro Science Challenge – a space science adventure for children aged 7-11 made in collaboration with some of the UK’s most brilliant space science organisations including the UK Space Agency, The Met Office, The Science Museum, The Royal Observatory Greenwich, Young Rewired State, the British Science Association and the European Space Agency.

Children sign up as UNSA Cadets and take on six Missions during which they learn about space weather, astronomy, computer coding and nutrition as well as building and launching their own rockets. On completing each mission they are awarded a digital badge endorsed by one of our partners and, if they complete all six Missions they can level up and become an Agent of UNSA.

At the heart of all of UNSA’s work is a passionate belief in the power of story-telling and play to inspire engagement and learning. Throughout the Missions, Cadets can interact with Mini Jon – he’s a Cadet (like them) and is doing all the same Missions. His dream is to become UNSA’s first astronaut and go to space himself, but he needs a lot of help and support from the other Cadets to succeed. In the six weeks prior to Tim’s launch on December 15th and in partnership with our friends at Coney, we ran an intensive period of interaction during which children could follow the story of several characters and interact with them through the Makewaves platform to deepen their engagement with the learning.

As of 1st January 2016 (just 8 weeks after we launched the project) 12,175 badges have been awarded to 10, 855 children taking part in the adventure. That is A LOT of Cadets and a lot of badges! And we’re expecting many MANY thousands more to be awarded as we continue to run the adventure until Tim returns to Earth in June 2016. Here’s a short video we made showcasing some of the work done so far:

Once Tim has completed his mission, we’ll be running a nationwide Graduation Ceremony to celebrate the work of all the Cadets that have completed all six Missions and become Agents of UNSA. Our first Graduation Ceremony was a wonderful event in the Imax Cinema at the Science Museum – 400 children attended with their teachers, parents and carers to watch Tim blast off into space (on a MASSIVE screen!) and receive certificates signed by him. 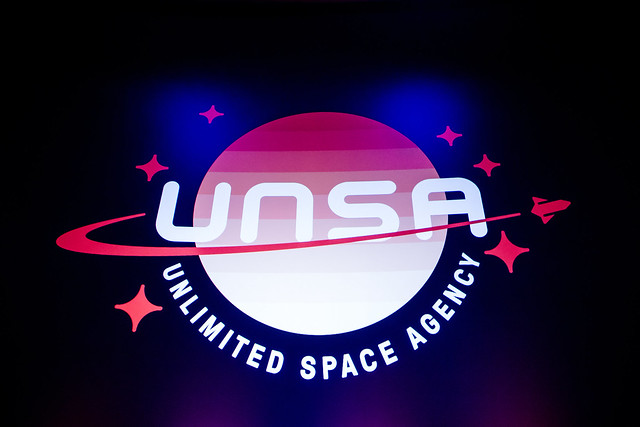 “Thank you, for a very special day run by very special and talented people. You all contributed to and made this project so special and personal. It was great to be there with MoonRock and our hearts were bursting with pride, to see you all and then get a big smile and thumbs up from Tim was so special and will never be forgotten, it was truly both inspirational and humbling to be at such a special occasion.” from Team Leader Forty2, Mum of Cadet MoonRock who she educates at home.
If you’d like to take part and join us for the next one, head over to our site at Makewaves and click the JOIN US button.
UNSA – Ready for the Universe
Our Space Shed has been shortlisted for