Our Assistant Producer Javairya joined us in January 2020 when we had an exciting year of touring and new projects lined up. And then… well, and then 2020 happened. Here she describes her first year like no other…

I didn’t want to start this off with a cliche but it really is hard to believe that a year has passed since I started at Unlimited. If I had been asked in January 2020 how I saw my first year panning out, it would have been wildly different to this. I applied to be Unlimited’s Assistant Producer because I was genuinely excited by the company’s work, after watching How I Hacked My Way Into Space earlier in the year at The Holbeck. It was the perfect opportunity to take on some more responsibility, gain some touring experience and continue my producing career.

The 21st of January was pencilled in as my first day of work. At that point, China had just confirmed that human to human spread was taking place and the worldwide death toll was at 4. Even as the situation progressed, it was hard to think about lockdowns and quarantine and completely changing our way of life. But March quickly came around and it was clear that this was serious in a way that we couldn’t quite process.

At Unlimited, we already had remote work systems in place. With the four of us and our family of freelancers based all over the country, we had experience of the various video call platforms and messaging apps that are available out there. The real adjustment and biggest challenge was living under lockdown. I know I really valued being able to check in with the team (even if it was digitally) and appreciative of the understanding we all had, being in the same boat.

The uncertainty running through the industry was another issue that weighed heavily on my mind. We immediately threw ourselves into running The Astro Science Challenge, a space adventure for children aged 7-11 years old that we repurposed into a homeschooling resource, with 2 scheduled live broadcasts a week. My role as Missions & Communications Officer was to act as the point of contact for Team Leaders, for any questions or queries they had. TASC was one of the best projects that I could have taken part in at the time. As well as working on it, I was able to experience it on the other side through my younger sister’s participation. I also got to immerse myself in the UNSA universe, so to speak, by playing pretend about HQs and missions in a time where we couldn’t leave our neighbourhoods. Another push out of my comfort zone was filming a biscuit review. I’m not usually one to put myself out there but I couldn’t say no to a serious debate over why Bourbon biscuits are superior.

Summer came, everything started opening up and the prospect of finally seeing people in real life and not on a screen arrived. The team were able to meet after 4 months of video calls, as part of Little Live Stories for Leeds, a set of performances that took place around the city. We took the Space Shed to The Holbeck, which felt like a full circle moment a year on from the first time I had encountered the shed. The whole day felt like a brief moment of normality and the joy of putting on a show again was just what was needed. 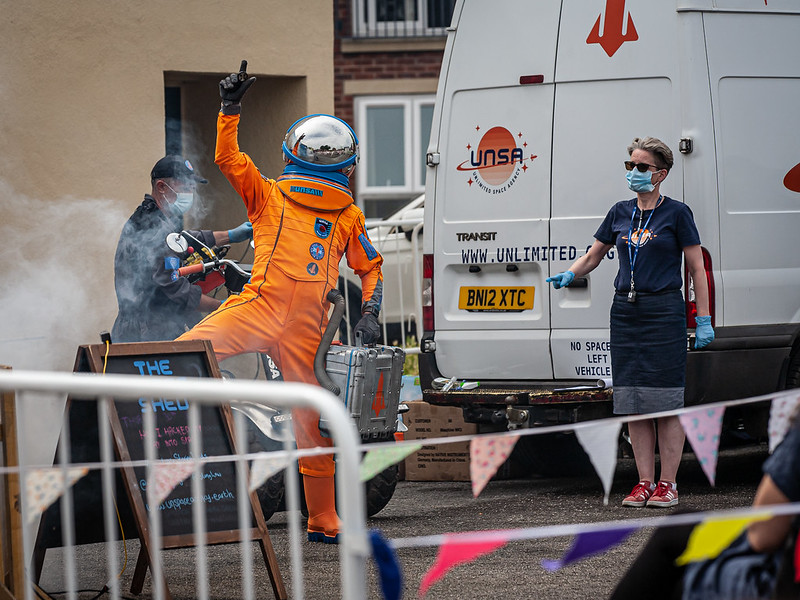 As we know, everyone had to adapt again as the year went on. We released another series of live broadcasts including an interview with Charlie Bolden, the former Administrator of NASA who may be one of the coolest people I’ve encountered in my career. There was also some development of The Ethics of Progress and again, there was some normality in organising some R&D and rehearsal.

It was only at the end of the year that we realised how much we’d really been able to achieve. While it was a first year that no one could have seen coming (if they had, I think they owe us all the lottery numbers at the very least) we’d steadily got through it. Watching what has happened elsewhere, I feel lucky to have been at Unlimited through this challenging first 12 months. While I do feel more resilient and even cautiously optimistic as we look ahead at the roadmap, getting back out on tour is the main thing I’m looking forward to. From there I’ll take on my second year at the company and whatever it may bring with it.