A co-production with Polka Theatre

It’s 2035, and we’re ready to send the first human beings to Mars. Gail and Stefan have been selected from thousands, and are ready to launch. Their four friends and colleagues are following close behind. We want you to come with them…

The internationally renowned Polka Theatre commissioned us to create our first show for children – a new play to inspire children about science, space travel and the wonders of the solar system…

Fun, fast-paced and packed with emotion, Mission To Mars was based on the real science of planned Mars missions. We joined Gail and Stephan as they defied gravity and went further through the solar system than we’ve ever been before. 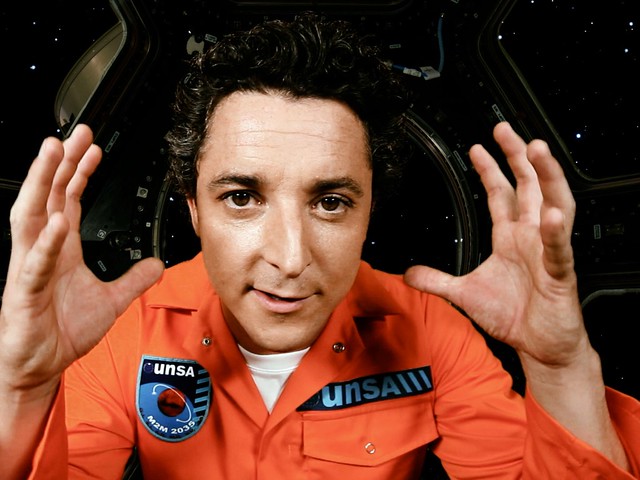 Clare, Jon and Chris wrote Mission To Mars in consultation with Dr Gail Iles (particle physicist and at the time an Astronaut Instructor for the European Space Agency) and Professor Andrew Newsam (of the Astrophysics Research Institute at Liverpool John Moores University and the Director of the National Schools’ Observatory Project).

The play was primarily made for (and with) 7-11 year olds. That known, our ambition was always to make a show that appeals to all ages. We were totally influenced by the family friendly sophistication of films like WALL-E, The Incredibles and Up.

Mission To Mars placed its young audience firmly at the heart of the action but never talked down to them and didn’t shy away from asking the big questions.

It was pretty AWEsome and after a 7 week run in London went on to tour to major regional theatres across the UK.

As if that wasn’t enough, we also worked with long term collaborators Coney and Radiowaves to create The Astronautical Challenge an adventure into space for school children to immerse themselves in over 5 weeks in class, led by their teachers. This pilot project grew into the Astro Science Challenge, now available to download as an app so you can become an Agent at the Unlimited Space Agency at school or at home.

Welcome to the show. We hope you can make it…